Intraperitoneal hyperthermic chemoperfusion (HIPEC or IPHC) is a type of hyperthermia therapy used in combination with surgery in the treatment of advanced abdominal cancers. In this procedure, warmed anti-cancer drugs are infused and circulated in the peritoneal cavity (abdomen) for a short period of time. The chemotherapeutic agents generally infused during IPHC are mitomycin-C and cisplatin.

Before patients receive HIPEC treatment, doctors perform cytoreductive surgery—a procedure to debulk, or reduce, the size of a cancerous tumor—within the abdomen. When as many tumors as possible have been removed, a heated, sterilized chemotherapy solution is delivered to the abdomen to penetrate and destroy remaining cancer cells. The solution is 41 to 42 degrees Celsius, about the temperature of a warm bath. It is circulated throughout the abdomen for approximately 90 minutes. The solution is then drained from the abdomen, and the incision is closed.

IPHC is generally used after surgical removal of as much cancer as possible (debulking), which may include the removal of all involved peritoneal areas. These procedures can be 8–10 hours long and carry a significant rate of complications. IPHC is used as a viable solution for certain advanced stage tumors in the abdomen that have spread many small tumors throughout the abdomen, when surgery is not likely to be possible or effective. It can also be applied, during surgery, directly on the area, for those whose abdominal cancer is advanced but is still considered surgically resectable, as an alternative to surgery and traditional chemotherapy alone.

Among patients with stage III epithelial ovarian cancer, the addition of HIPEC to interval cytoreductive surgery resulted in longer recurrence-free survival and overall survival than surgery alone and did not result in higher rates of side effects.

Various chemotherapies are used and there is no clear consensus on which drugs should be used. Mitomycin C and Oxaliplatin are the most commonly used agent for colorectal cancer, while Cisplatin is used in ovarian cancer.

Given bidirectionally with 5-FU intravenously and oxalplatin in the peritoneum

The procedure is divided into three stages:

Exploration: Here the surgeon will open the abdomen evaluate the peritoneal cancer. 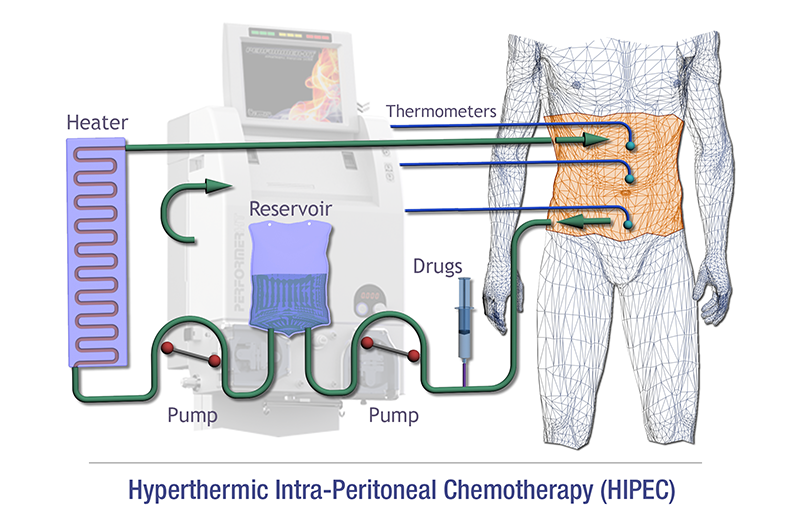 HIPEC is a treatment option for people who have advanced surface spread of cancer within the abdomen, but no cancer outside the abdomen.

-Allows for high doses of chemotherapy

-Enhances and concentrates chemotherapy within the abdomen

-Reduces the rest of the body’s exposure to the chemotherapy

-Reduces some chemotherapy side effects