Thermal injury to cells begins at 42 ℃ Only 8 minutes at 46 ℃ is needed to kill malignant cells, and 51 ℃ can be lethal after only 2 minutes. At temperatures above 60  ℃ intracellular proteins are denatured (killed) rapidly, cell membranes are destroyed through dissolution and the melting of lipid bilayers, and lastly, cell death is inevitable.

Radiofrequency ablation (RFA) is a new technique for treating tumors localized to certain organs. A needle electrode is advanced into the targeted tumors via either a percutaneous, laparoscopic, or open (operation) route. The RF energy causes the tissue around the tip of the probe to heat up to a high temperature above which cells break apart and die. For eradication of all cancerous cells, the goal is to place the probes so that they destroy the entire tumor plus an adequate "rim" of non-cancerous tissue around it.

*  Effective treatment for small cancers
*  A minimally invasive procedure with no skin incision, and minimal risk to patient
*  Typically little or no pain after the procedure
*  Procedure can be repeated if new cancer appears

With intent to cure:

With intent to control pain:
Bone: cancer that has spread to the bones can be treated to control severe pain.

The use of heat to tumors has been part of medical practice from Greek and Egyptian times, when superficial tumors are subjected to cautery. In 1970s and early 1980s, the application of heat from an external source became a focus of care when it was noted that malignant cells were more sensitive to heat than normal parenchyma.

Radiofrequency ablation (RF ablation) is a minimally invasive treatment for cancer that is approved by the Food and Drug Administration. It is used to treat liver and kidney cancer and to manage pain resulting from small bone cancers. RF ablation is an alternative to surgery, when surgery is not likely to be successful or has failed or when other medical conditions increase the risk of surgery.

In November of 1996, Dr. Kenneth Tanabe and Dr. Nahum Goldberg performed the first radiofrequency ablation of a patient with a liver tumor in the United States. This history-making procedure was performed in the operating rooms of the Massachusetts GeneralHospital as part of an Institutional Research Board approved clinical research protocol. The experimental procedure was deemed a success in both efficacy and safety. Following this initial trial, researchers in the Division of Surgical Oncology at the Massachusetts GeneralHospital have continued to lead the way in making cutting edge advances in this field.

Recently, the image-guided technique kills cancer cells by heating and destroying them. Radiofrequency is the most commonly used of several methods of destroying tumors by applying heat or cold.

Thermal injury to cells begins at 42  ℃  with the exposure times to such low-level hyperthermia needed to achieve cell death ranging from 3 to 50 hours depending on the tissue type and conditions. As the temperature increases to above 42 ℃ there is an exponential decrease in the exposure time necessary for a lethal response. For example, only 8 minutes at 46 ℃ is needed to kill malignant cells, and 51  ℃ can be lethal after only 2 minutes. At temperatures above 60  ℃ intracellular proteins aredenatured rapidly, cell membranes are destroyed through dissolution and melting of lipid bilayers, and lastly, cell death is inevitable.

Tumors less than 3 cm in greatest diameter can be ablated with the placement of a needle electrode with an array diameter of 3.5 cm when the electrode is positioned in the center of the tumor. Tumor larger than 3 cm requires more than one deployment of needle electrode. Typically, the array is placed first at the interface of one side between the tumor and nondiseased parenchyma, and then the array is reposited and re-deployed on another side at 2.0- to 2.5 cm intervals within the tissue. To completely destroy cancerous tussue, the needle electrode is used produce a thermal lesion that incorporates not only the tumor, but also nondiseased tissue in a zone 1 cm wide surrounding the tumor.

RF ablation has shown excellent results in treating primary liver tumors such as hepatoma or hepatocellular carcinoma, since these types of tumors tend to be slow-growing and encapsulated (enclosed within a capsule inside the liver).
It is especially useful for patients who are not ideal surgical candidates, cannot undergo surgery, have recurrent tumors or don~t respond to conventional therapies.

The following types of cancers that originate in the liver are most likely to be successfully treated with RF ablation:
Tumors 4 centimeters (cm) or smaller -- larger tumors may require additional therapies
Three or fewer tumors per patient -- if there are more than three, RF ablation can be performed but it is less successful
Patients waiting for a liver transplantation who have a hepatoma

The most common metastatic disease in the liver treated by RF ablation has been colon cancer. Results with RF ablation are good if the tumors are small and few in number. The ideal candidates for treatment have these conditions:
Tumors are less than 4 cm
No more than three tumors
No evidence of metastatic disease elsewhere
Radiofrequency ablation may also help in patients who are undergoing surgery. For example, RF ablation can be combined with surgery to treat a patient who has several tumors in different locations. RF ablation also can be used to treat tumor recurrence; for instance, in patients who have had surgical resection of a metastatic tumor that recurs.

Lung Cancer that are limited in size (less than 3 cm in diameter) and few in number (one or two) can be treated with RF ablation, if they are separate from vital structures. RF ablation can help lung Cancer patients who are not candidates for traditional surgery, due to advanced disease in the lungs, poor cardiac function and/or poor pulmonary function.

The experience with kidney cancer ablation is very encouraging with approximately 95 percent of small tumors showing no evidence of recurrence on follow up imaging exams. Surgery is the treatment of choice for most kidney tumor patients; however, in the following situations, RF ablation might be considered:
Patients with one kidney
Patients with other medical conditions which might prevent surgery
Elderly patients in whom surgery or postsurgical recovery would be difficult
Patients with tumors less than 4 cm in size

Similarly, bone ablation for pain reduction is effective in more than 80 percent of patients treated who have a limited amount of cancer involving the bone.The purpose of the procedure is primarily to treat the pain, rather than to cure the cancer. In Mayo Clinic~s experience, 80 percent of patients who have had RF ablation to relieve bone cancer pain reported a significant decrease in pain during the follow-up period, with 44 percent of people reporting total pain relief at some point following treatment.

With intent to cure:
*Liver
For cancer that originates in the liver and for some types of cancer that have spread to the liver..

*Kidney
For small cancers. Lung
For cancers limited in size and few in number..
With intent to control pain:
*Bone
Cancer that has spread to the bones can be treated to control severe pain..

Any invasive procedure has risks. Based on experience, complications from RF ablation are uncommon, occurring in about 5 percent or less of patients.

When a tumor is destroyed local nerve endings may become irritated or some bleeding may occur. This can cause an aching, dull pain in and around the treated area. Many patients feel no pain and are symptom free after the procedure while others have discomfort requiring pain medication. Almost all patients are pain and symptom free within two weeks of the procedure.

The normal tissue nearby may be injured if heated. Organs that are commonly at risk of injury include adjacent bowel, gallbladder, bile ducts and diaphragm. If a significant local injury occurs, surgery may be needed for correction. However, this only happens about three (3%) to five (5%) percent of the time. The risk is very dependent on the location of the tumor and the structures that surround it.

In sammary, it is important to point out that

1) radiofrequency ablation remains experimental;
2) radiofrequency ablation is not a substitute for resection (surgical removal) whenever possible, as removal of the tumor is considered the "gold standard" for treatment in appropriate patients;
3) the chances of successful (complete) tumor destruction is about 75% ,less for tumors larger than 3 cm and more for tumors smaller than 3 cm;
and 4) it is exceedingly rare that pateints with liver metastases from cancer of the pancreas, lungs, stomach, or esophagus are candidates for radiofrequency ablation unless they have no more than two tumors measuring no more than 4.0 cm in size. For these patients, cryosurgery may be choice. 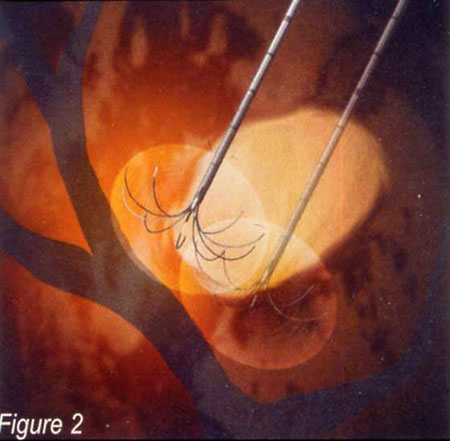 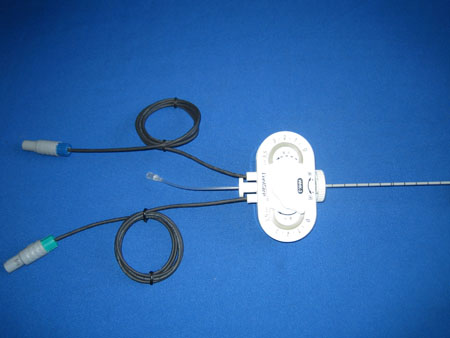