Embrace a new life, “No painful treatment for me”

To embrace a new life is amazing, right? “Every time I arrive at this hospital, I’m surrounded by love. If no angels in white (nurses) help me, I won’t be here! It’s really nice to meet them,” said Mrs. Tse, a rectal cancer patient from Hong Kong. Now, let’s come to the following story to see what happens.

In July 2017, Mrs. Tse suffered from abdominal pain so she went to a hospital in Hong Kong for examination which indicated a tumor measuring about 3*3cm. For further diagnosis, she went to another hospital for examination. One week later, she was diagnosed with rectal cancer. At that time, a doctor suggested her have two surgeries. One was to remove her tumor and make a temporary stoma while the other one to suture the stoma after a few months. However, before these two surgeries, she had to go through 25 cycles of radiotherapy and 6 cycles of chemotherapy to make her tumor smaller. Hearing this, out of fear and unwilling to go through hair loss and weight loss, Mrs. Tse refused the suggestion but instead took pain killers to control her pain. No other alternatives, she turned to Chinese medicine but after having 8 packages of Traditional Chinese Medicine (TCM), she was getting worse so she had to stop it. “Western medicine didn’t work, so did TCM. Is it the end of my life?” said Mrs. Tse desperately. 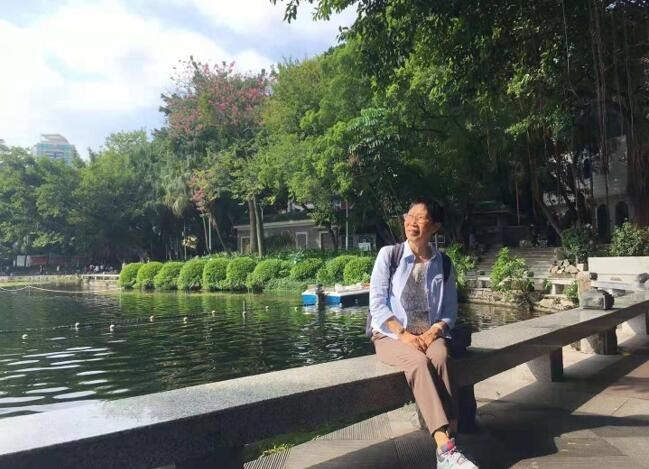 Decision made after full consideration

When Mrs. Tse had to accept whatever life threw at her, her friend suggested that she communicate with Mr. Chung again, who had once mentioned Fuda Cancer Hospital affiliated to Jinan University (Fuda) and the treatments there. Then Mrs. Tse found some useful information about the hospital that could help her on the Internet and she told her friends about Fuda but they thought medical treatments in Mainland China might not be as good as that in Hong Kong. Mrs. Tse felt confused and when she learned that a Fuda doctor would come to Hong Kong the next day, she decided to go there for advice. During consultation, she had two requests. First, no chemotherapy, because she didn’t want side effects such as hair loss; second, no surgery or a temporary stoma. After saying these requests, she nervously looked at the doctor, not only afraid that he would decline her request, but also that there was no available treatment for her. However, the doctor listened carefully and told her, "Interventional therapy can reduce side effects and surgery must be done, but whether you will have a temporary stoma should be determined according to further examination in Fuda." What the doctor said kindled the light of hope for her, so she decided to go to Fuda.

On August 28, 2017, Mrs. Tse arrived at Fuda. After consultation of a panel of tumor experts, she was informed of no need to make a temporary stoma so she happily stayed at Fuda for further treatments. As of the end of year 2017, Mrs. Tse had undergone 5 cycles of treatments including intervention and photodynamic therapy. On December 7, 2017, reexamination indicated a smaller tumor and tumor marker within normal range. Prof. Niu Lizhi said that her tumor was under control and no need to have a surgery. Hearing this, she said happily, “Thank Prof. Niu! I’m no longer worried about my tumor. Thank you, all of you!” 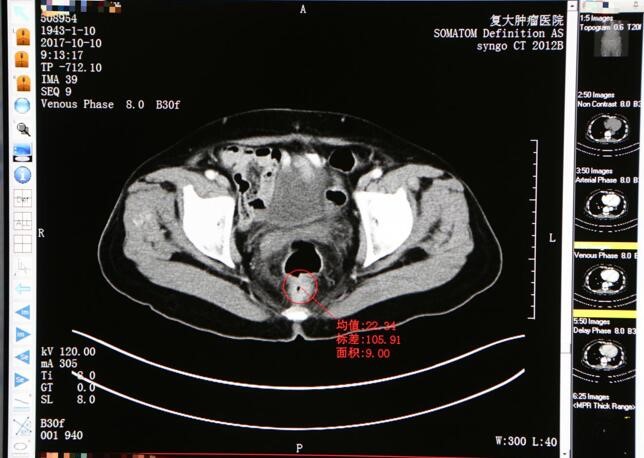 A CT film before treatments

When Mrs. Tse went back to Hong Kong, she double checked her tumor at a local hospital where a local doctor was amazed to find that her tumor had shrunk and tumor marker was within normal range. What surprised the doctor was that Fuda had been equipped with such advanced medical techniques as interventional and photodynamic therapy.

In Fuda, Vascular Interventional Therapy is performed under the guidance of imaging tools, during which a catheter is inserted into a tumor blood-supplying artery and then inject drugs. Because tumor capillaries have small openings, drug microsphere can enter into the tumor through the openings but cannot enter into normal vessels. Local drug concentration accumulated in a short term after interventional chemotherapy is much higher than that after systemic chemotherapy, producing strong treatment effect while avoiding multiple side effects caused by systemic chemotherapy. And this is exactly what Mrs. Tse had in Fuda and finally no significant side effects occurred.

A MRI film after treatments

Nowadays, Mrs. Tse has good appetite and keeps doing morning exercise. She said, “I had a wonderful experience in Fuda. Firstly, therapeutic effect here is amazing and my body weight increased 6 pounds during treatments. Secondly, I made a prompt decision at that time and keep thinking positive so I didn’t miss the best timing for treatments. Thirdly, I’m not alone in Fuda because medical staffs here treat me like a family member.” At last, Mrs. Tse would like to thank Fuda and those who helped her so she donated RMB 100,000 to help patients in need at Fuda.

We wish each encounter in Fuda can light up cancer patients’ life and give them hope; we wish every patient can luckily embrace a new life in Fuda like Mrs. Tse does. 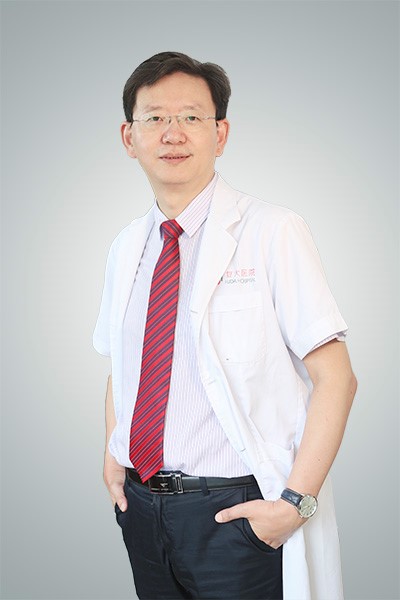 Dr. Niu Lizhi graduated from the Fourth Military Medical University with a doctoral degree in Thoracic & Cardiac Surgery. He is Vice President of International Society of Cryosurgery. He is supervisor of master degree course in Jinan University. Specialized in minimally invasive cryosurgery for cancers, he has made outstanding achievements in the treatment of pancreatic cancer, liver cancer, lung cancer, renal cancer, thyroid cancer, peritoneal cancer and other solid tumors with unique cryosurgery treatment approach. Dr. Niu Lizhi and his team have performed most cases of cryosurgery (nearly ten thousand cases) and most complicated cryosurgery for cancer treatment in the world.

As the Chief Specialist for minimally invasive cryosurgery centre, Dr. Niu Lizhi, together with his team has provided cryosurgery training and guidance to more than doctors from Malaysia, Indonesia, the Philippines, Korea, China’s Taiwan and the Southern Medical University, Xiangya Medical University and other hospital s in China.